Yuri Gagarin was the first human in space. His flight, on April 12, 1961, lasted 108 minutes as he circled the Earth for a little more than one orbit in the Soviet Union's Vostok spacecraft. Following the flight, Gagarin became a cultural hero in the Soviet Union. Even today, more than six decades after the historic flight, Gagarin is celebrated in Russian space museums, with artifacts, busts and statues displayed in his honor.

Gagarin's flight came at a time when the United States and the Soviet Union were competing for technological supremacy in space. The Soviet Union had already sent the first artificial satellite, called Sputnik, into space in October 1957. 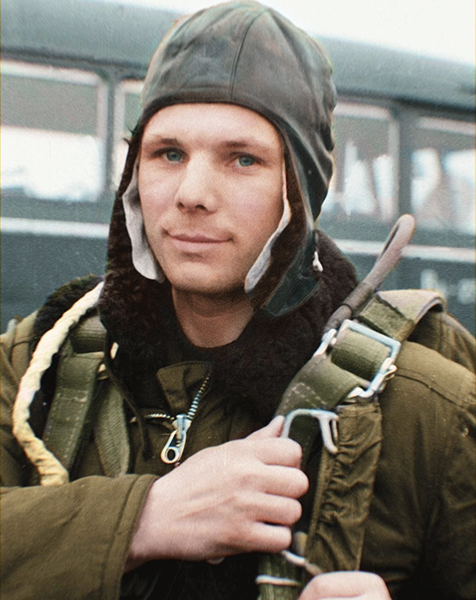 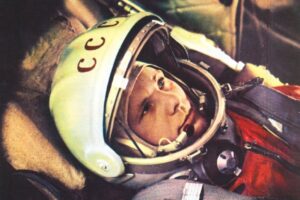 Over the course of 108 minutes, Vostok 1 traveled around the Earth once, reaching a maximum height of 203 miles (327 kilometers). The spacecraft carried 10 days' worth of provisions in case the engines failed and Gagarin was required to wait for the orbit to naturally decay. But the supplies were unnecessary. Gagarin re-entered Earth's atmosphere, managing to maintain consciousness as he experienced forces up to eight times the pull of gravity during his descent.

Gagarin became a lieutenant colonel of the Soviet Air Forces on 12 June 1962, and received the rank of colonel on 6 November 1963. Soviet officials tried to keep him away from any flights, being worried of losing their hero in an accident.

Gagarin was backup pilot for his friend Vladimir Komarov in the Soyuz 1 flight, which was launched despite Gagarin's protests that additional safety precautions were necessary. When Komarov's flight ended in a fatal crash, Gagarin was permanently banned from training for and participating in further spaceflights.

Gagarin instead began to train future cosmonauts including the first woman to fly into space, Valentina Tereshkova. He moved on to become deputy training director of the Star City cosmonaut training base. 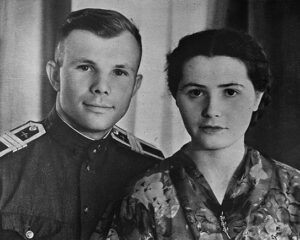 On March 27, 1968, Gagarin was killed while test-piloting a MiG-15 jet fighter aircraft. He was survived by his wife, Valentina Ivanovna Goryacheva, and two daughters. His remains are buried at the Kremlin in Moscow, and part of his spacecraft is on display at the RKK Energiya museum.

When NASA's Apollo 11, the first mission to put people on the moon, landed in July 1969, the crew left behind a commemorative medallion bearing Gagarin's name.

"From here, I can see everything!" 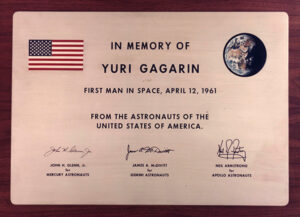