Some came for adventure in the frontier of deep space. Some are running from a sordid past. Meet the current denizens of Javik Station and Gaga-Rin Colony…

Andrei Javik: Andrei was born in the former Soviet Union and studied mining and robotics engineering. Station owner, entrepreneur and robotics genius, Andrei is the principal character in the Javik Station Role play. His recreational units provide state-of-the-art, exotic entertainment to the new arrivals, turning Javik Station into one of Eisa’s success stories.

Endo: Medical Practitioner, playboy.  Endo came to Gaga-Rin after an accident on Mars that cost him an arm and a leg (literally).  He now provides medical services for the colony and instructs all new participants on the ‘Mars Protocol’.

Mortus: Technology and Arms merchant.  Mortus travels regularly to/from Eisa developing his trade links and providing arms and technology to many of the diverse colonies.  Mortus is listed as a sector manager of Phoenix Technology Research Corporation.

Gali: Resident Engineer and vertically challenged lover of Harley.  Gali arrived at Eisa from Terra-Ursa and has kept his origins largely to himself.  He is exceedingly talented with technology, but manages to regularly get kidnapped.  Gali recently suffered krakom spore poisoning and had a Nanite-Systems controller installed to save his life.

Harley: Synthetic security guard and lover of Gali. Harley was formerly a Martian marine until his dishonorable discharge and worked in a number of entertainment and bar roles until he sought to break away from that life and found the Gaga-Rin colony. He underwent a profound change as a result of krakom spore poisoning and is now almost fully synthetic.

Rob: Bartender at Sputnik’s Bar. Rob crash landed on Gaga-Rin Colony in 2019 penniless. After making the rounds as a go-go dancer while trying to sell his crashed ship for scrap, he was promoted to bartender and host of the colony’s watering hole. You can expect free drinks if your sexy or watered down swill if you give him a hard time! If you don’t see Rob at the bar, don’t worry! He’s probably at Javik Station giving special “service” to one of Andrei’s customers!

Nate: Supply Depot and all-round nice guy. Nate is a recent arrival at Gaga-Rin who found his way to the colony from Earth. Nate is always there for the others on the colony and has a habit of supplying Andrei with the wrong vodka.

Eric: Gaga-Rin Security Patrol.  Eric comes from the Ursa Colonies and more specifically Io.  Eric assisted in the delivery of black market goods that came out of Io and delivered them to the other colonies on Ursa.  Eric came to Javik Station to forge a new life with new opportunities.  Eric is single, loves the color blue and the Garingor flower.

Jaren: Repair technician at Tovich’s Robot Storage & Repair shop. Jaren immigrated from Earth and has a background in computer science with extensive work with the Boeing Company. Jaren loves the colors black, and blue, and long walks on the beach with a certain someone…

Igor Antonovich: A former Soviet miner, Igor owns Sputnik’s bar… the watering hole at Gaga-Rin Colony. Don’t expect Igor to get up from his cups, but if you try to short change the bartender, you’ll get a taste of Russian justice! 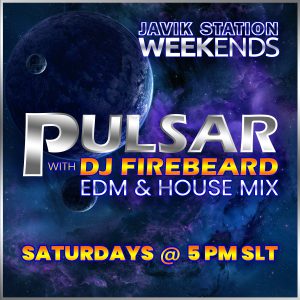